My friend Sam posted this to my page!!! How cool is this?! If anyone goes make sure to take tons of pictures for us. I'll post them here, to my blog, my website and my yahoo group with full credit to those who send them in! THIS IS HUGE GUYS!!! 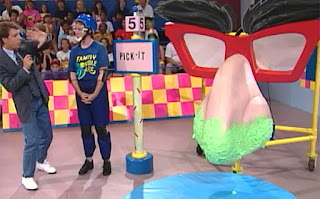 The network has enlisted original host Marc Summers to return, for the first time in 16 years, to the Double Dare set for a live edition of the game show that’ll dominate one night of San Diego Comic-Con this year.

The show celebrates its 30th anniversary on October 6 and is the network’s longest-running game show, having aired from 1986-1993 in its original run. “Thirty years later, people still stop me on the street every day and tell me playing Double Dare is the one thing they wish they could have done growing up,” Summers says.

Lucky fans at Comic-Con will get to do just that, in a nighttime exhibition on July 22. The event will be streamed live on The Splat’s Facebook beginning at 9:30 p.m. PT, wherein fans will be able to watch the red and blue teams compete in rounds of trivia and a slew of classic physical challenges from Double Dares past: Down the Hatch, the Wringer, the Human Hamster Wheel, and the legendary Double Dare Nose.

Nickelodeon’s presence at Comic-Con isn’t just limited to the Double Dare revival. In addition to its daily floor booth activities, the network is plotting a 25-year retrospective of Nickelodeon animation panel for Thursday, July 21 (featuring Hey Arnold! creator Craig Bartlett, Invader Zim’s Jhonen Vasquez, The Fairly OddParents’ Butch Hartman, and Rugrats’ Arlene Klasky); a Teenage Mutant Ninja Turtles panel on July 22; a women in animation panel celebrating pioneering female cartoon creators on July 22; and a Back to the ‘90s reunion panel featuring the casts of All That and Legends of the Hidden Temple on July 23.