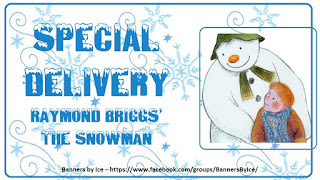 Opening: "I remember that winter because it had brought the heaviest snow I had ever seen. Snow had fallen steadily all night long and in the morning I woke in a room filled with light and silence, the whole world seemed to be held in a dream-like stillness. It was a magical day... and it was on that day I made the Snowman."

One winter's day a boy builds a snowman then, at the stroke of midnight the snowman comes to life. The boy invites the snowman in the house were they play and explore while his parents slept.

After exploring the house they go outside where they go on a motorcycle right and later they fly over the boy's village and soon they are flying over the ocean. When they finally land they are in a snow-covered forest where they join a party of snowmen and meet Father Christmas with his reindeer. After a while they return home and they boy goes to bed. The morning after the return journey, the sun has come out and the boy wakes up to find the snowman has melted. Then he reaches into his pocket and finds the snowman scarf given to him by Father Christmas. It had been a wonderful night indeed.

2012 sequel: The Snowman and the Snowdog (from Wikipedia) 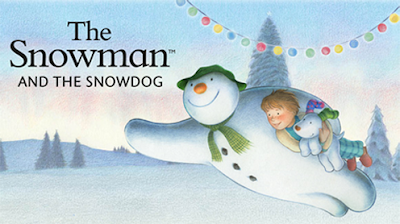 A new twenty three minute special titled The Snowman and The Snowdog aired on Channel 4 on Christmas Eve 2012 at 8pm GMT, to celebrate the thirtieth anniversary of the original short and of Channel 4. Produced at the London-based animation company Lupus Films, with many of the original team returning, the sequel was made in the same traditional techniques as the first film, and features the Snowman, a new little boy and a snow dog, flying over landmarks and going to another party.

The idea of a sequel had been resisted by Raymond Briggs for several years, but he gave his permission for the film in 2012.

The sequel was dedicated to the memory of producer John Coates, who died in September 2012, during its production.