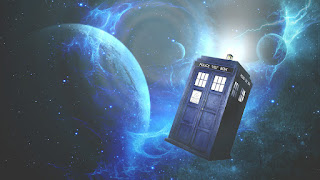 The Five(ish) Doctors Reboot
This 2013 comedy spoof pays homage to the British science fiction television program Doctor Who. Written and directed by Peter Davison, who stars alongside fellow former Doctor actors Sylvester McCoy, Colin Baker, and Paul McGann debuted on the BBC Red Button service after the broadcast of "The Day of the Doctor", the official 50th anniversary special.

The plot focuses on the fictionalized, disgruntled Davison, Baker and McCoy, who become embroiled in misadventures as they attempt to sneak onto the set of the official Doctor Who 50th anniversary special. The Five(ish) Doctors Reboot was nominated for the 2014 Hugo Award for Best Dramatic Presentation (Short Form), along with "The Day of the Doctor".

*This video is on Daily Motion and can not be posted in this blog, please click on the above link. thank you.*

Doctor Who At The Proms 2008 (From Wikipedia)
Prom 13: Doctor Who Prom was a concert showcasing incidental music from the British science fiction television series Doctor Who, along with classical music, performed on 27 July 2008 in the Royal Albert Hall in London as part of the BBC's annual Proms series of concerts.

The Doctor Who Prom showcased the work of Murray Gold, who has composed the incidental music for Doctor Who since its return in 2005. Other classical pieces were also played. The concert was conducted by Ben Foster and Stephen Bell, and performed by the BBC Philharmonic.

It was presented by actress Freema Agyeman, who played companion Martha Jones on Doctor Who. Other Doctor Who actors and performers dressed as Doctor Who monsters also made appearances on stage and in the audience. The concert included video montages of scenes from Doctor Who and a specially filmed "mini-episode" of Doctor Who called "Music of the Spheres", which was presented on a screen above the orchestra and included live interactive elements. The Doctor Who Prom was broadcast live on BBC Radio 3 and recorded for subsequent television broadcast on BBC One on 1 January 2009. It was positively reviewed in several newspapers. The success of the 2008 Prom led to more Doctor Who Proms for the 2010 and 2013 Proms seasons.