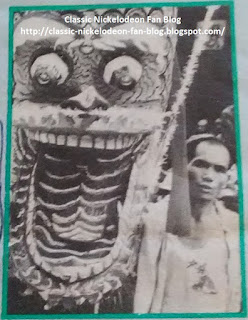 Recently I was asked about the program “Spread Your Wings” and decided that I should turn that answer into my blog post for Classic Nick Thursday. And while this may be a short article I feel that it is important to talk about shows like Spread Your Wings so that we don’t lose the memory of them, especially since there is no video footage of the show itself. I do have audio recordings of several, very early, Nickelodeon shows, including some music from Spread Your Wings, but I do not have them on a CD; however, I’m going to try to capture that sound and post it online in the future. – That’s a ways off so for now back to Spread Your Wings.

According to the April 1982 original Nickelodeon TV Guide, yes, they had their own network guide, it describes Spread Your Wings as such:

“Around the world with NICKELODEON to examine the exotic crafts and traditions of young people from different lands. Pre-teen, Teen.”

And that’s exactly what it was. Spread Your Wings was a program that focused on children from different countries and their families. We’d see their schools and if they had after school jobs or if their families owned their own business we’d get to see them at work and they would explain how they did their job. I remembered one girl from, China I think, she painted paper umbrellas. They were very beautiful.  Another girl’s father made shadow puppets and the girl from Russia taught us to say grandmother in Russian. (It’s “babushka” by the way.)

From what I can remember they visited kids in Mexico, Czechoslovakia, Russia, China, Yugoslavia, and so forth. I’m sure there were many more but as I said those are just a few that I can remember.

This was a very cool show because no matter where you lived you got to see that kids are the same no matter where they’ve from. Oh, sure they may have spoken different languages and dress differently but as a kid I remember feeling connected to them, probably just because I knew they were about the same as I was but still.

The really great thing about this show was that, as kids, we really did go all around the world and no matter where you lived you were able to see what so many different cultures were like from the comfort of your own living room and I really, really, hope that some footage of this shows up online one day.

Quick note about the above picture. That picture is from Spread Your Wings from that April 1982 original Nickelodeon TV Guide that I mentioned above. Hope you enjoy seeing it.