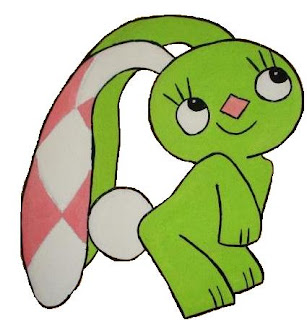 Those of you who remember watching Pinwheel will probably remember the charming Hungarian animated children's series “Bunny in The Suitcase” or “A kockásfülű nyúl,” which, in English translates to "The Rabbit with Checkered Ears".

This 26-episode animated classic was first produced in 1978 in the studios of PannóniaFilm and was created by the acclaimed children's literature writer and graphic artist Veronika Marék and animator Zsolt Richly.

The series originally ran every Saturday in the children's programming section of the Hungarian television channel, Magyar Televízió. Episodes were generally about one minute long and consisted of simple stories in which the rabbit with checkered ears helped one or more of the series' other main characters. Other characters included four children, a dark-haired girl named Kriszta, a red-haired boy named Menyus, a blond toddler boy named Kistöfi and a big bully named Mozdony.

Since the episodes didn’t have spoken dialogue there was no need for dubbing and made the storylines very comprehensible and adaptable in various countries. This helped later with the series being syndicated, first in the countries around Hungary, and then in nearly ninety other countries around the world. It also became somewhat sought after in the U.S., where it is often described as the "bunny in a suitcase" and recalled from its frequent broadcasts on the Pinwheel cable program which appeared on the original Nickelodeon channel.

At the time of the original series, merchandising was an unknown term in Hungary, but with the return of the series the rabbit can now be found on school accessories, pillows as well as in the form of plush toys.