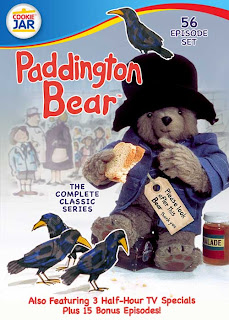 Oh my gosh yall, look at the email I just got from TVShowsOnDVD.com!!!

We've added a news item for "Paddington Bear" to the site. Here it is: The Original Stop-Motion '70s U.K. Program is Coming with 2 DVD Titles - 12:23 PM 1/04/2011 "Paddington Bear - The Complete Classic Series" has been announced for release on DVD, along with "Paddington Bear - Marmalade Madness" as well. We've got the story, with all the details and bonus material, over at the TVShowsOnDVD News!URL: http://www.TVShowsOnDVD.com/newsitem.cfm?NewsID=14877

Then you click on the link and it takes you to this article:

A complete collection of the endearing, stop-motion classic shows based on the acclaimed books! Dressed in his characteristic duffle coat and oversized hat, cuddly Paddington Bear has been capturing the imagination of children around the world for generations. Paddington Bear, the series based on the internationally acclaimed books by Michael Bond, remains one of the most successful children's programs ever produced in the UK.

While the '90s animated Adventures of Paddington Bear have made it to DVD (back in 2002!), the original 1975 stop-motion program from the U.K. hasn't come to disc in the U.S.A. before. Now, however Cookie Jar Entertainment in conjunction with Mill Creek Entertainment have announced that on February 15th they will release both Paddington Bear - The Complete Classic Series with all 56 shorts on 3 DVDs (487 minutes) for $14.98 SRP, as well as Paddington Bear - Marmalade Madness with 28 episodes on a single disc (194 minutes) for $9.98 SRP. Video is full screen, and audio is English Dolby 2.0 Stereo. The Complete Classic Series release also features a lot of bonus content: for starters it includes all three Paddington Bear specials: "Paddington Birthday Bonanza," "Paddington Goes to School" and "Paddington Goes to the Movies". It also includes 15 bonus episodes from two other shows in the Cookie Jar library: The Wombles and Huxley Pig. Finally there is DVD-ROM content that includes Wallpaper, Activity Pages (Spot The Difference, Word Search and Color-in Pages) plus other printable fun (door hangers and finger puppets). Very nice! We've also got a look at the front box art for each of these upcoming releases: 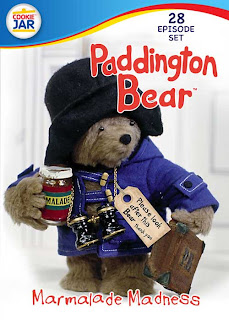