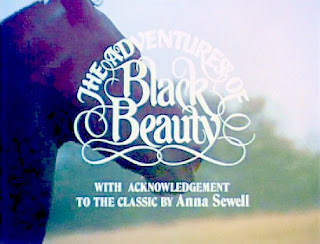 Last night while watching "The Adventures of Black Beauty" I decided that I wanted to do a bit of reading about it so I Googled it and found out something very cool.

The beautiful theme song that opens and closes the show is called "Galloping Home". It was written by Dennis King and performed by the London String Chorale. Also it was released as a single and peaked at number 31 in the UK charts in the week of February 2, 1974.

And for those of you who have never seen season one of "The New Adventures of Black Beauty" I highly recommend it. Season one if the continuation of the 1970's version and features two of the characters from the original series, Dr James Gordon (played by William Lucas) and Jenny Gordon Denning (played by Stacy Dorning). In other words the original Doctor Gordon and the original Jenny Gordon who of course is now grown and married with a step daughter - her name? Victoria - Vicky of course.

The old and new series is out on Region 1 DVD and also airs on the faith based channel FamilyNet.

And as a treat here is my video tribute to the show. Also check out my Classic Nickelodeon channels on youtube. I have one for regular programs, commercials and Special Deliveries. http://www.youtube.com/watch?v=Lhov0LkL9cg

For more reading on this please visit my blog at: http://classic-nickelodeon-fan-blog.blogspot.com/2009/05/adventures-of-black-beauty-now-on-dvd.html
Posted by Classic Nickelodeon Fan Blog at 11:24 AM No comments: