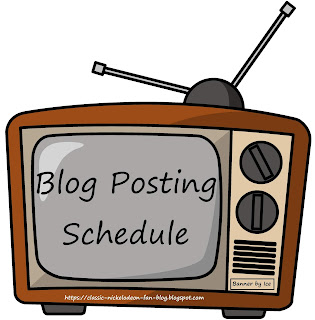 If you’re new to my Classic Nickelodeon Fan Blog, welcome. My goal for this blog was, originally, to bring together Nickelodeon’s first generation of viewers. Simply put, those of us who remember watching Nickelodeon from, roughly, 1979 through sometimes in the 1980’s.

When I’m able to I always post Nickelodeon’s classic programs, usually you will find them posted as part of my Special Delivery series but there’s a lot more to this blog than just Special Deliveries.

Here I will list my blog posting schedule so that you will get a rough idea of when I will be posting. Please keep in mind that there are times when, due to life, I may miss a post from time to time and I usually post very, very, late at night (at times after midnight.)

So that being said here is my blog posting schedule. Thank you for taking the time to check out my blog, hope you enjoy it.

Mondays
Mondays are always busy here at the blog because I alternate different series, which are:

Mystery Monday & Sci Fi Monday
This is my grown-up version of the classic, The Third Eye but rather than focus on the supernatural I prefer mysteries and science fiction instead. In this series I alternate between traditional mysteries as well as science fiction films mostly from the ‘50’s and ‘60’s.

Lights, Camera, Action – Film Making Tips For Beginners & Pros
This is my version of Standby…Lights! Camera! Action! where I post video about different topics such as prop building, financing, costuming and more.

Wednesdays or Thursdays – Special Delivery
This is exactly how it sounds but again with a bit of a twist. In this series I have tried to find as many of the original Special Delivery programs that I could and mix them with the traditional, classic, programs which aired in the early to mid 1980’s. But I also throw in crafting videos, interview with classic stars, concerts and a whole variety of things. I also do my best to post seasonal programs around the various holidays.

Saturdays
Classic Nick Rocks
This is my version of Nick Rocks: Video To Go! This is another really fun series for me because I get to let my hair down a bit. At first I would ONLY post ‘80’s music but after a while I decided that I wanted to open up a bit more and boy have I ever!

These days you will find a wide variety of music on my channel that include not only ‘80’s music but also a bit of classic country, songs of faith, holiday music, ‘90’s music, Spanish songs (included because of my Mexican heritage), show tunes, ‘50’s, and probably a few more styles that I haven’t listed.

In Search of Saturdays
Generally, I try to post this list on the last Saturday of each month but have been forgoing in lately and posting Classic Nick Rocks instead. Basically, this is a list of Classic Nickelodeon programs that I have been look for to purchase.

Viewer Posts
Occasionally I will receive email from Classic Nickelodeon fans asking for information on various programs which aired back in the day. If for some reason I am unable to help them with the information they are looking for I will post a special blog such as, “Viewer In Search Of,” for “Looking For A Title,” basically whatever the fan is in need of I will customize the blog title to their needs.

Generally, I will post their original email to me and my answers to them, but I will always protect the fan’s privacy and will not post their email address unless they give me permission ahead of time.

Classic Nick Sighting
If a program is airing in which some form of Classic Nick will be represented, I will post and alert letting you when the program will air. Since I don’t watch a lot of television these days those posts will be a bit fewer and farther between. Also check out my “Classic Nick Sightings” page to find out when and where sightings have occurred.
Holiday Series
The Holiday Series is just as it sounds, around each particular holiday I will post Special Deliveries and Classic Nick Rocks blogs that apply to which ever particular holiday it is. During the months of November and December all other Series Blogs will be substituted for Special Delivery blogs then everything will go back to normal around the middle, or end, of January.
Former Series
Those of you who have been around for a while may remember my Classic Nick Wednesdays / Thursdays series.  Basically, this was a series in which I wrote articles about different Classic Nickelodeon programs. I kept it up for a while but that was around the times I was doing my course work with The Institute of Children’s Literature and didn’t have time to write so I let the series fade. I’m still very busy these days with studying of a different nature so haven’t tried to bring it back, but I have thought about pulling out the old articles and posting them for new viewers but haven’t done it yet. I’ll have to think about it a bit longer.