With set flats made from the Styrofoam packing used to ship laserdisc players and 3/4" video decks PopClips was broadcast weekly on the youth-oriented cable television channel Nickelodeon in late 1980 and early 1981 and was the direct predecessor of MTV.

The first music-video program was a promotional device for Warner Communications' record division, which was first conceived by former Monkee Mike Nesmith with production beginning in the spring of 1979 at SamFilm, a sound-stage built and operated in Sand City, California by Sam Harrison, a Monterey Peninsula College instructor with a motion picture background; the first "VeeJay" was Jeff Michalski.

Posted by Classic Nickelodeon Fan Blog at 2:25 AM 1 comment:

Classic Nick Wed. – Simon in the Land of Chalk Drawings 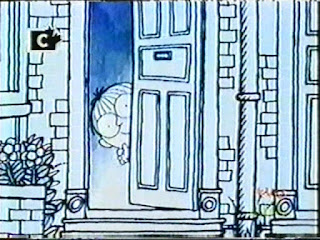 This simple classic 5-minute cartoon program was produced in the early 1970s by FilmFair Productions in London for Thames Television and was based on the writings of Edward McLachlan that was originally broadcast around teatime in Britain. In America children fell with Simon and his chalk drawing friends when they were featured on Captain Kangaroo where it was narrated by Bob Keeshan instead of Bernard Cribbins; it also aired on Nickelodeon’s Pinwheel, and after that, on Romper Room. In Canada it was narrated by Ernie Coombs and shown on CBC Television, while the Ontario public network, TVOntario, aired the original British version.

The show centers around a boy named Simon who has a magic chalkboard, magic in that whatever he draws on the chalkboard become real in "The Land of Chalk Drawings". Almost everyday Simon climbs over a fence near his home with a ladder to visit his friends in the land of chalk including his chalk-drawn friend Henry. Stories often revolve around the unintended effects that Simon's drawings have on the Land of Chalk Drawings, such as when an upset Simon draws a picture of his angry self, which proceeds to go on a rampage and various other adventures.

== New Episodes ==
A new version, currently being broadcast on Teletoon, features a new theme song, an updated outfit for Simon, blue and white colors in Simon's home world, and replaces his friend Henry with a new friend, a girl named Lily. In this new version, Simon wears a striped T-shirt, shorts and trainers, instead of a necktie.

== Simon In Popular Culture ==
The series was later parodied on NBC's Saturday Night Live by Mike Myers, however unlike the British series, the SNL sketches took place in Simon's bathtub, in which Simon shows, and discusses, drawings that correlate with his life.

Simon is also an award users can build on the popular Internet game BrokenPictureTelephone. It is awarded to users by other users who feel the drawer has the drawing skills of a 4 year old.

50th Anniversary What We Know

Yesterday, April 30, 2013 marked the 40th anniversary for my favorite Classic Nickelodeon show “The Tomorrow People” however since I do not have anything to post for my usual Wednesday post I’ve decided to post the TP counter and talk about Doctor Who.

When the Tomorrow People first aired on ITV in 1973 it was ment to be a children’s counter to the BBC’s Doctor Who. Now with 2013 marking the show’s 50th anniversary I thought I would share this with you. But please keep in mind that I AM NOT a fan of head writer Steven Moffat.

The 50th Anniversary: What We Know 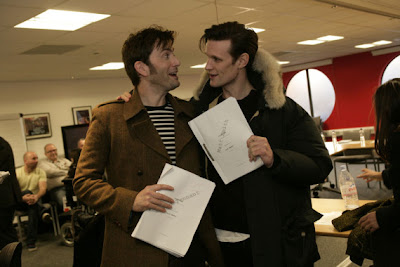 A compilation of everything we know about the 50th anniversary special(s) so far. This article will be continually updated as more info emerges over the coming months until broadcast. For Series 7 in 2013 see this post.

Filming – Began April 2013.
Note: The episode is being filmed and broadcast in 3D

Format
1×60 minutes (according to this BBC poster). Moffat later denied this.
The format of the anniversary is still to be confirmed by the BBC. Steven Moffat originally said “Why talk in the singular?” Matt Smith also hinted at multiple episodes, but more recent rumours seem to suggest a one-off feature-length outing.

In another interview Moffat said: “I’ve got various plans, but all I can say emphatically is it will be huge. It won’t be just one thing…. We’ll be doing lots of stuff. The plans are quite extensive, and changing all the time. Oh my God, we will hit that year very, very hard indeed.”

Synopsis
Story details are next to non-existent so far. The only hint given was from Matt Smith who teased the word “paintings.”

Will any past Doctors return? – David Tennant is now confirmed.

As for the other Doctors:

Chris Eccleston
A BBC statement said: “Chris met with Steven Moffat a couple of times to talk about Steven’s plans for the Doctor Who 50th anniversary episode. After careful thought, Chris decided not to be in the episode. He wishes the team all the best.”

Paul McGann
“The anniversary doesn’t start until November. Whatever it is that they’re planning and they are making, they’ve got time to do it. It’s my feeling [and] this is just a personal thing, once they resolve Chris Eccleston’s participation or non-participation either way, then they’re free to [figure it out]… Being actors anyway, they’ll call us on the Friday and say, ‘You’re starting on a Monday’.”

Sylvester McCoy
“All the fan bases all over the world believe that [everyone should be involved], but not the producers at the BBC.”

Colin Baker
“No [I have not been asked]. As far I know, neither of any of my erstwhile colleagues have been asked either.”

Peter Davison
“I feel no need to turn my back on it, but I don’t feel like it’s the kind of thing they’d do. I’d be very surprised if they tried to do anything involving the old Doctors because it always takes a slight stretch of the imagination anyway to figure out why the previous Doctors look older, but I’m sure that can be done.”

Tom Baker
“I think if they ask me nicely or I can see what they want me to do, I’d consider it. I think the fans have been so good to me, they’d expect me to at least make an appearance.”

What about past companions?
Billie Piper (Rose) is now confirmed.

As for the other companions:
Carole Ann Ford will return as Susan Foreman according to a rumor in the Express.

Louise Jameson (Leela): “None of us knows yet what’s going on, just told to keep the days free.”

Sophie Aldred (Ace): “I’d love to. I’d drop everything. I did find out that Russell T Davies had planned for Ace [to appear in] the Sarah Jane Adventures… You never know. I’m waiting for a call.”

Noel Clarke (Mickey): “I’m sure if I was gonna be there, I’d know about it already. If they called me, then I’m sure there’d be a conversation, but I’m not calling them or chasing it.”

John Barrowman (Captain Jack): “Everyone on Twitter tries to make it like it’s my decision, but the bottom line is I was not asked. [The Powers That Be] don’t want to put Jack in it. And I know fans are really upset about it, as was I.”

Freema Agyeman (Martha): “I’m doing two things for the 50th but nothing to do with being in the drama. I got misquoted hideously once saying that there are some rumblings going on about being involved in the 50th in terms of the drama. It’s not. It’s in terms of conventions and interviews and things like that, which we’re all doing stuff to promote the 50th. We have to. It’s the ‘Doctor Who’ family and we want to.”

Karen Gillan (Amy): ”Whether Arthur Darvill and I are involved, we’ll have to wait and see.”

Moffat on bringing back classic monsters:
“One thing I’m slightly concerned about is that you get something like the 50, people start talking like it’s a full stop. I want to build for the future. I want to set up the next 50 years and to say: ‘Here are the new monsters we’re introducing.’ Rather than doing something which might seem like a farewell tour, because it certainly is not.”

The Express claimed that Master will be back, but played by Benedict Cumberbatch. However Cumberbatch and Moffat later denied it. Moffat said that John Simm is still the Master.
Posted by Classic Nickelodeon Fan Blog at 1:01 AM No comments: