As some of you may, or may not, know I’ve been taking a summer break from my usual Classic Nickelodeon Wednesday posts but since this movie is going to air on Monday at 6PM on Teen Nick I wanted to post this for you. 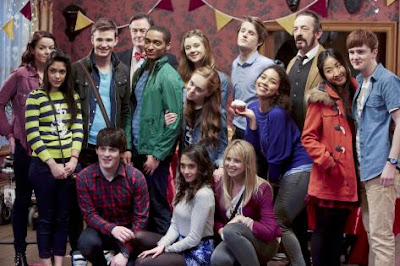 House Of Anubis: Touchstone of Ra

The Touchstone of Ra is an upcoming movie that will premiere on June 14, 2013 and will be a 90 minute movie.

Plot – The Touchstone of Ra catches up with the students of Anubis house on the eve of their graduation as they encounter a new group of underclassmen and a mysterious stone that leads them on a quest to save the world from evil. In the Touchstone of Ra, the residents of Anubis House are nearing the end of their final term when their celebratory mood is cut short after a group of underclassman unexpectedly move into Anubis house, and a trip to an Egyptian museum leaves the group with a strange stone in hand. The Sibunas are confronted with their greatest challenge yet as they set out to decipher the secrets behind the touchstone of the ancient Egyptian god, Ra. As the power of the stone begins to cause chaos, it’s up to leader Eddie Miller (Burkely Duffield) and the Sibunas to solve the mystery before it’s too late. As the mystery unfolds, the Sibunas learn that not everyone is as they seem, and there’s only one among them who can save them from the powers of the stone. Before these seniors graduate they need to stop the evil moving in.

2. The original cast will be in the film.

3. This movie will be about Ra.

4. The original characters will be graduating.

5. If there is Season 4, the original characters might not appear.

Posted by Classic Nickelodeon Fan Blog at 8:23 PM No comments:

For those of you who are interested in the new CW’s premiere of the Tomorrow People this October here’s a 4:38 minute preview!