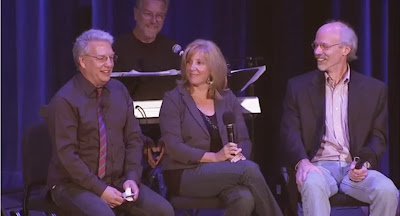 **My apologies, I meant to post this after church last night and I totally forgot.**


After watching a video that Andy posted in my “A New Beginning for Classic Nickelodeon” group I stumbled on this video that was made during the launch of “Slimed: An Oral History of Nickelodeon’s Golden Age” by Matthew Klickstein.


Brought to you by 92nd Street Y and hosted by Marc Summers and Matthew Klickstein this almost three hour videos features a rotating panel of Classic Nickelodeon starts, writers, creators and more dish on the inside stories of some of favorite shows.


Published on Oct 2, 2013
“Double Dare we say it—a Nickelodeon celebration? Network executives and creative staff who helped create the foundation of the entire channel will also be joining us to explain exactly how Nick happened at all!


Nickelodeon icon Marc Summers—with creators, stars, writers, producers and musicians from such classic 80s/90s Nick shows as "You Can't Do That on Television," "Double Dare," "Salute Your Shorts," "The Ren & Stimpy Show," "Doug," "The Adventures of Pete and Pete," "Clarissa Explains It All," "Nick Arcade," "Welcome Freshmen," "Wild & Crazy Kids" and "Hey Dude." Many of these guests haven't been together since these shows aired. Bringing it all together is master-of-ceremonies Mathew Klickstein, author of Slimed: An Oral History of Nickelodeon's Golden Age.”

Labels: Clarissa Explains It All, Double Dare, Doug, Marc Summers, Mathew Klickstein, Nick Arcade, Salute Your Shorts, Slimed, The Adventures of Pete and Pete, You Can't Do That On Television