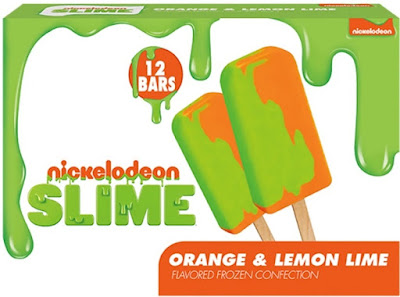 Yes, you read the headline correctly, Nickelodeon has now introduced a new edible version of their iconic green slime. BUT before anyone else throws another shout-out to the ‘90’s kids in leu of their supposed victory of the green slime ice-cream let’s take a look back shall we?

Before the ‘90’s ever came along, and indeed before Nickelodeon came along a little show called “You Can’t Do That On Television,” had already used up gallons of green slime so if ANYONE could call the green slime ice cream a win it is defiantly the ‘80’s kids, the first generation Nickelodeoners! Congratulations guys!

Below is a collection of the news articles I’ve collected telling us all about this new edible slime!

Before DIY slime videos were popular with kids on YouTube, Nickelodeon made green goop cool by pouring it on game show contestants, celebrities, and many other unlucky victims. Now, People reports that the children's entertainment brand has made an edible, slightly-less-messy version of their famous green slime available to buy.

Nickelodeon slime ice cream bars and cups rolled out in Walmart stores (which already sell a ton of other products inspired by that signature green slime) on April 29. The bars combine slime-green lemon-lime and orange ices in Nickelodeon's signature shades. The ice cream cups are made from vanilla ice cream with green frosting swirls. A 12-pack of slime bars retails for $2.97, and a 12-pack of the cups costs $4.97.

Calling all '90s kids and their parents! The iconic Nickelodeon green slime has inspired a new ice cream and frozen treat.

There are also green slime inspired popsicles. The bars are orange and lemon lime flavored. 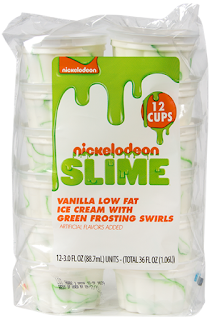 Every kid who’s ever wanted to get slimed at the Nickelodeon’s Kids Choice Awards may now be able to get the 23rd or 24th best thing: Slime Ice Cream. People reports that starting today, Nickelodeon Slime ice cream cups and frozen bars will be available exclusively at Walmart. The cups are made with “low-fat vanilla ice cream and green icing swirls” and cost about $5 for 12, while the pops are a combination of “creamy lemon lime and orange ices” and cost about $3 for a dozen.

It’s not a bad marketing ploy, appealing to millennial parents and their young kids in one fell scoop—er, swoop. Previous slime food attempts include “Slime Sauce” ketchup, and Jell-o’s edible slime, which combined the kids’ craft trend with actual food.

People points out that a former Nickelodeon host once revealed “the sticky slime is actually made up of vanilla pudding, apple sauce, green food coloring and a little oatmeal.” So these ice cream bars and pops appear to be mimicking their namesake in name and appearance only. That probably won’t make much difference at all to the kids (and their parents) who want to snatch them up for nostalgia’s sake.

Getting "slimed" by Nickelodeon has always been an honor. All our favorite stars have been drenched in the lime green goo—Justin Bieber, Demi Lovato, the entire *NSYNC crew. Now you (yes, YOU!) can get in on the tradition because Walmart is launching Nickelodeon Slime Ice Cream.

The collaboration, which will hit freezer aisles nationwide on Monday, includes low-fat vanilla ice cream cups swirled with green frosting as well as orange lemon-lime frozen bars. You can pick up 12 cups of the throwback-inspired iced cream for $4.67 or purchase 12 pops for $2.97. Though we haven't had the pleasure of trying them just yet, I'm pretty sure they'll taste better than the real thing.

In 2017, Nickelodeon game show host Marc Summers finally spilled the tea on the network's infamous green slime and how it's made. While technically it is edible, we're not exactly dying to eat the vanilla pudding, oatmeal, applesauce, and green food coloring concoction.

If you're looking for something a bit more authentic, JELL-O's "Monster Slime" has the same green hue as the TV version, but that tastes great. No weird applesauce/vanilla pudding combo here. According to the brand, it "stretches if you pull it slowly, but snaps if you pull it apart fast. It's firm if you squeeze it, but it can also pour and drip like a liquid!" Ummm, it drips like liquid? That sounds exactly like Nickelodeon slime to me.

Green slime has been emblematic of Nickelodeon's brand for years. Everyone from celebrities attending the Kids' Choice Awards to contestants from the channel's game shows have been "slimed," or hit with a steady stream of thick, green goo.

Now, Nickelodeon is transforming its signature green slime into a series of sweet treats that will turn up the nostalgia for '90s kids everywhere.

Posted by Classic Nickelodeon Fan Blog at 12:05 AM